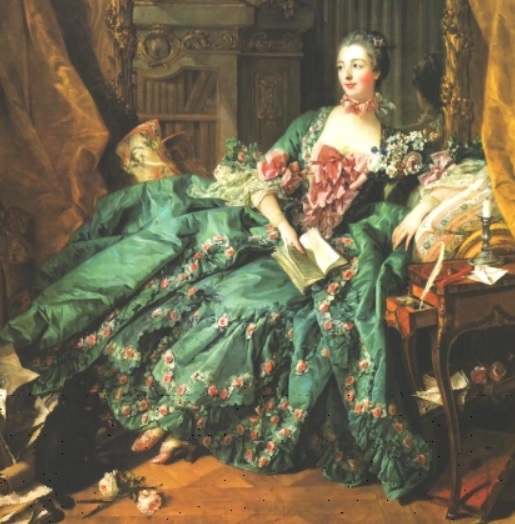 This Friday, in the run up to Valentine’s day, we are taking a different approach for our Friday blog and giving you some light relief before the weekend.

What could be more romantic than The Rocaille style, or French Rococo period? It grew out of Paris during the reign of Louis XV, having thrown of the restrictive bonds of Louis XIV’s etiquette, the movement flourished between about 1723 and 1759. The French court fell into a sumptuous period of decadence under the patronage of Madame de Pompadour, the mistress of Louis XV. Her position was a highly political one as well as a sexualized one, she “shouldered much of the blame” for France’s failure in the Seven Years War and for the running court debts. As we delve deeper into her life, it is truly fascinating and colourful.

Madame de Pompadour, born Jeanne Antoinette Poisson (Miss Fish), was not an obvious choice for that of the Kings mistress. She was not born into aristocracy and her father was a figure of scandal. At the age of 9 she was taken to a fortune teller who predicted that the girl would one day reign over the heart of a King. Henceforth she became known as “Reinette”, meaning “little queen”, and was groomed to become the mistress of Louis XV. She went on to marry the nephew of the man her mother was mistress to. In 1744, Jeanne Antoinette sought to catch the eye of the King while he led the hunt in the forest of Sénart. Because she occupied an estate near this location, she was permitted to follow the royal party at a distance. However, wanting to attract the King’s notice, Jeanne Antoinette drove directly in front of the King’s path, once in a pink carriage, wearing a blue dress, and once in a blue carriage, wearing a pink dress. The King sent a gift of venison to her. By March, she was the King’s mistress, installed at Versailles in an apartment directly above his.

Madame de Pompadour had a particular passion for porcelain. She bought hundreds of objects in all sorts of shapes, styles and colours, some of which became associated with her, in particular the ornate, swirling forms known as ‘Rococo’. A certain shade of deep pink became known as ‘Pompadour Pink’. She put a great deal of energy into promoting French manufacturers. She transformed the fortunes of Sèvres porcelain and the Gobelins tapestry works. The Wallace Collection has a truly fabulous collection of Sèvres. This is merely a glimpse into a period of exuberance and hidden meaning.